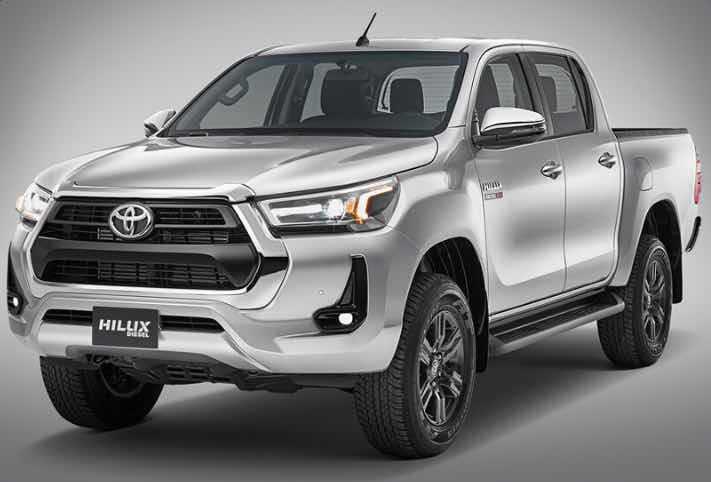 The Toyota Hilux is an all-terrain pick-up truck manufactured by Toyota since 1968. It is currently marketed in its eighth generation. The Toyota Hilux is one of the toughest and most rugged vehicles you can buy and is characterized by a long commercial history, legendary reliability and a great ability to withstand continuous mistreatment. Some units are manufactured primarily at Toyota's factory in Durban, South Africa, as well as at the Chachoengsao factory in Thailand.

The direct rivals of the Toyota Hilux in the market are the Ford Ranger, the Mitsubishi L-200 or the Nissan Navara. All of them have a similar format to the Toyota Hilux and cover a wide range of prices and performance within the pick-up format.

Engines and versions of the 2022 Toyota Hilux

On one hand it offers the 2.4-liter 150 hp turbodiesel engine - for the entry-level DX and SR 4×2 versions and, on the other hand, the 204 hp 2.8-liter turbodiesel for the SR 4×4 version and above (SRV and SRX). The latter offers a torque of 500 nm in automatic versions and 450 nm in manual versions. The DX and SR versions only have a manual gearbox, while the SRX and SRV versions offer both options: manual or automatic gearbox, both with 6 speeds.

Only the cheapest version has space for 2 persons. However, from the double cab option onwards there is already a double row of seats. The quality of materials is in accordance and also has some technological implementations, which are appreciated.

These are the features that can be found on the subject of technology for the cabin:

If you want a 2022 Toyota Hilux, it's definitely one of those kinds of models that's completely worth it. If you are looking for something cheap or with more equipment. Its price will be worth it, it has versatility and above all, it stands out on the issue of reliability.